Five years ago, Popcorn Time was widely embraced by pirates, thanks to its ability to stream torrent files through a user-friendly interface.

This rapid rise raised concern among many movie industry companies, who worked hard to contain the threat by going after several forks and their developers.

This resulted in the shutdown of several projects including Popcorntime.dk. The site offered information on Popcorn time and its availability but didn’t host any software itself. Nevertheless, it still found itself subjected to rightsholders’ complaints.

The matter piqued the interest of Danish law enforcement which eventually resulted in a criminal investigation. In August 2015, Danish police arrested the alleged operator and Popcorntime.dk was subsequently shut down and placed under the control of the state prosecutor.

The case was highly unusual because the domain in question didn’t host the Popcorn Time software. Instead, the site offered instructions, information, news articles, as well as links to sites where the application was available.

PopcornTime.dk as it appeared in 2015 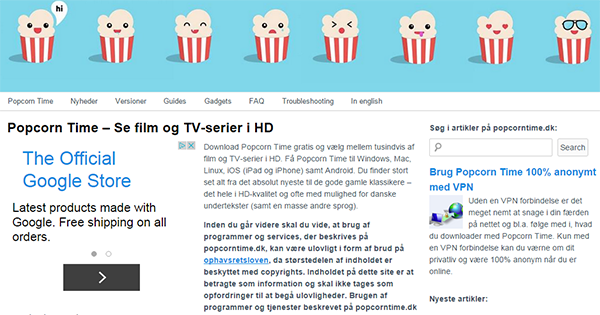 In most cases this issue would have blown over, especially since the site had a relatively small number of users. However, the Danish investigation triggered a criminal prosecution, with the operator facing a potential prison sentence.

In 2018, this resulted in a conditional 6-month prison sentence for the man behind PopcornTime.dk. The court ruled that spreading information about the controversial movie streaming service warranted liability for contributory copyright infringement.

The defendant disagreed and appealed the case at the High Court, which later handed down a similar verdict. In a final attempt to have the ruling reversed, the site operator went to the Danish Supreme Court, which announced its verdict yesterday.

The Supreme Court confirmed the decisions of the High Court and District Court, ruling that the operator of Popcorntime.dk is indeed liable for contributory infringements via Popcorn Time.

In his defense, the operator argued that the previous rulings restricted his right to freedom of expression and information, which would violate Article 10 of the European Convention on Human Rights.

However, the Supreme Court disagreed. Instead, it ruled that the site was specifically designed to target potential Popcorn Time users who received concrete instructions on how to use the software. This is a criminal offense, even in the absence of concrete infringements by users, the Court found.

The Court thereby assumed that “a large number of users of [the operator’s] website have downloaded and used the Popcorn Time program and that use of the software, as a general rule, involved copyright infringement.”

The Court upheld the 6-month conditional prison sentence. The site operator, who is now in his 40s, was further sentenced to 120 hours of community service and more than $67,000 in ad revenue was confiscated.

Local anti-piracy group RettighedsAlliancen (Rights Alliance) is pleased with the outcome. According to the organization, this ruling is the first of its kind when it comes to criminal contributory copyright infringements.

“The judgment is, as far as we know, the first of its kind in the EU on the legal basis of criminal contributory copyright infringements,” Rights Alliance Director Maria Fredenslund informs TorrentFreak.

“So it confirms that the marketing and recommendations on the websites are in fact contributory infringements, even though they are not related to any particular copyright infringement, but rather to the infringements related to the Popcorn Time service in general.”

The Supreme Court ruling could have far-reaching consequences for other websites that provide information about piracy services. While the nature and purpose of the site still play a role, operators can’t simply hide behind the fact that they don’t host an infringing application on their server.