At TorrentFreak, we keep a close eye on copyright debates and discussions. This includes the opinion pieces of musician and industry activist David Lowery at The Trichordist

While we don’t agree with his general style, which doesn’t shun rather outrageous personal attacks, everybody has the right to voice an opinion.

In Lowery’s case, this often comes in the form of discrediting people who, in his view, are a threat to the pro-copyright agenda. These people hurt the interests of artists and keep piracy alive, his message goes.

When Canadian law professor Michael Geist opposed efforts to block websites in his country, Lowery responded in his typical fashion, making it personal.

“And the beneficiaries of his tortured interpretation of facts and data is predictably the US Silicon Valley monopolies that indirectly benefit from the massively infringing pirate website operations?”

We won’t repeat the entire article here, which is best read in context, but there’s a sweet bit of irony in it all. We don’t make a habit of calling people out, but given the circumstances, we’ll make an exception.

To illustrate his opinion piece Lowery decided to use a photo of US tanks. Not massing at the Canadian border, as his title suggests, but other than that the imagery fits well.

What caught our eye, however, was the fact that the photographer wasn’t mentioned. Initially, we assumed that it might be a royalty free stock photo, but that’s not the case. 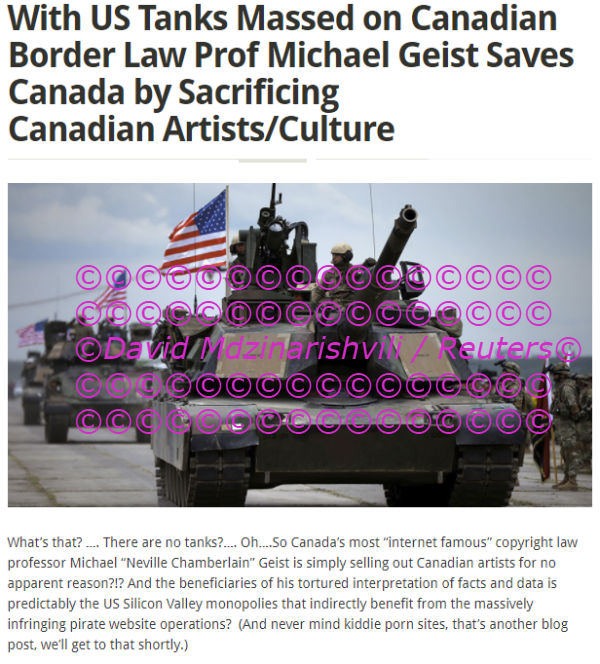 The photo in question was taken by photographer David Mdzinarishvili, who makes a living this way. We contacted Mdzinarishvili about the lack of credit, who told us that the copyright belongs to his employer Reuters.

So how did it end up on The Trichordist?

In theory, it’s possible that Lowery licensed the photo from Reuters, but even then, the news organization requires its users to credit both Reuters and the photographer.

“You agree that you will provide a clearly visible written credit to Reuters and to any Photographer credited in the caption of a Photograph which you publish..,” Reuters’ terms of use reads.

This is exactly what RT did when it published the same photo last year.

What Lowery did here is hotlink to the image on RT’s servers, without mentioning the copyright holder or the photographer. Without a proper license, some would equate that to “stealing” RT’s bandwidth as well as Reuters’ intellectual property.

Now, would The Trichordist license a 2016 premium news photo from Reuters and use it in an unrelated article without attribution and hotlink it from another unrelated site? No, it turns out that it was embedded without permission.

It’s hard not to see the irony…

Michael Geist, while being accused of “selling out” artists in the same article, does things differently. He has made a habit of using Creative Commons licensed images in his articles, with permission, and with a credit to the photographer.

We reached out to David Lowery shortly before publication to ask for an explanation. He thought the photo came from a US Defense Department press release, but confirmed that it was hotlinked from RT instead.

Lowery initially said that us that Reuters or the photographer can contact the Trichordist, and that they will “gladly unlink the photo” if needed, but he decided to take it offline later.

At the time of publication the original article is still visible in Google’s cache.

IF YOU ARE LOOKING FOR A VPN SERVICE