While dozens of millions of people use uTorrent as their default BitTorrent client, the software has seen few feature updates in recent years.

That doesn’t mean that the development team has been sitting still. Instead of drastically expanding the current software, they have started a new ambitious project: uTorrent Web.

This new piece of software, which launched rather quietly, allows users to download and stream torrents directly in their default web browsers, such as Chrome or Firefox.

The way it works is pretty straightforward. After installing the client, which is Windows-only at the moment, torrent and magnet links are automatically opened by uTorrent Web in a browser window.

People can use their regular torrent sites to find torrents or use the app’s search box, which redirects them to Google.

TorrentFreak took the application for a spin and it works quite well. Videos may take a short while to load, depending on the download speed, but then they play just fine. As in most modern video players, subtitles are also supported, if they’re included.

The streaming functionality supports both audio and video, with the option to choose a specific file, if a torrent contains more than one.

Applications and other files can also be downloaded, but these are obviously not streamed. 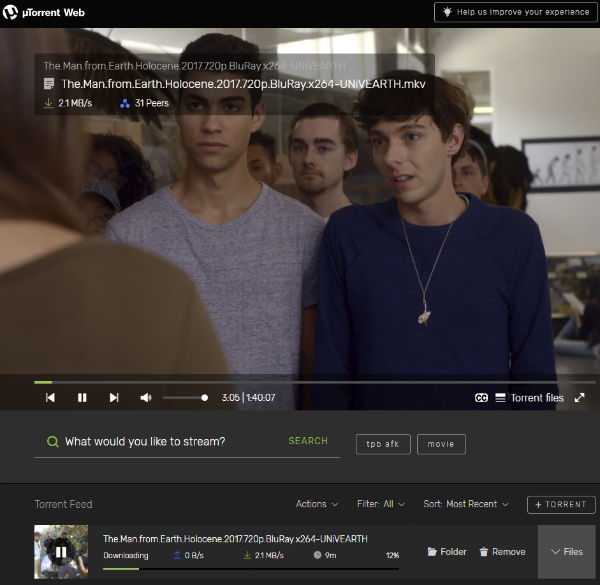 The current Beta release comes with several basic preferences settings and users can change things such as the download location and upload speed. It’s likely that more options will follow as development matures, however.

While the quiet release comes as a surprise, BitTorrent founder Bram Cohen previously told us that the browser version was coming. In the long run, this version could even replace the “original” client, he seemed to suggest.

“We’re going to roll it out and get feedback and make sure that people are happy with it before we roll it out to everybody.”

For now, however, it appears that BitTorrent is offering both products side-by-side.

It’s been a turbulent week for BitTorrent Inc., thus far. The company had to deal with a serious vulnerability in its flagship software uTorrent. This same issue also affected uTorrent Web, but the most recent version is fully patched, we were told, as is the stable release.

Until then, people are free to take uTorrent Web for a spin here.