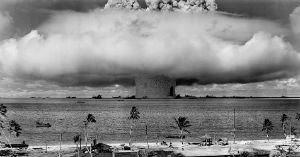 Since the lawsuit was filed in March 2019, we’ve been keeping a close eye on the battle between author John Van Stry and Travis McCrea, the former operator of eBook download platform, eBook.bike.

Right from the beginning, it has been an unconventional copyright dispute. Instead of maintaining a low profile, McCrea actually invited litigation, goading Van Stry and other authors to take him on. McCrea insisted he would prove that what he was doing was entirely legal and eventually Van Stry and his legal team took the bait.

Ten months on and it seems increasingly unlikely that McCrea or Van Stry will come out of this matter in materially better shape than they went in.

If this was being scored as a professional boxing match entering the final rounds, thus far every judge would have Van Stry massively up on points. His legal team has put on a dominating performance and at no juncture has McCrea looked like taking a single round. As a result, Van Stry is now the prohibitive favorite to take the win, at least on paper.

But in this matter, winning rounds is only part of the story. If court documents are to be believed, Van Stry’s team has put in a massive effort to get this fight won but McCrea hasn’t put up much of a fight at all, despite calling for the conflict to begin with. In fact, he’s accused of obstructing every effort to get the matter settled.

Whether this is the inevitable result of McCrea choosing to defend himself in a complex case isn’t entirely clear but according to comments made by Van Stry this week, tactics designed to reduce his ability to fight may be at play.

“If you’ve followed any of the legal followings, you’ll know that I was presented with a long list of things for discovery, which really made it seem like Travis was just trying to make my life hard. But I delivered it,” the author wrote on his GoFundMe page, which is raising money towards his litigation.

“However, Travis has refused to deliver anything. The judge has told him time and time again to produce, but Travis has continually refused. Pretty much he’s just ignoring everything and everybody. This of course has driven my legal costs way up, but that’s obviously Travis’ game, to try and bankrupt me or something I guess.”

While Van Stry is clearly ahead, the costs of coming out on top are mounting. The case to date has cost him $60,000 with less than half of that being covered by donations. That puts the author $30,000 in the red but with the finishing line currently marked with a $90,000 price tag, he could still be $60,000 in the hole at the end.

This personal financial exposure is the result of the case being one of the few on record to feature an individual copyright holder suing a site owner, rather than litigation being carried out by a deep-pocketed corporation. It’s a point not lost on the author.

“[P]irates can do what they want of course, because our legal system makes it horrendously expensive for private individuals to go to court and most judges seem to be unaware of these things, possibly because they’re used to dealing with corporate lawyers who are on a salary. So money isn’t an issue for anyone in most of their experience,” he says.

This entire case has been difficult to watch but as the months go by, one has to wonder what any final victory will look like for Van Stry. Importantly, eBook.bike is down and has been for months, so if that was the aim of the litigation the mission has already been accomplished. Obviously an injunction to prevent it from returning would be a useful addition but then what?

If one is obtained in the United States, any judgment would need to be enforced against McCrea in Canada. That’s not beyond the realms of possibility but given that the former Pirate Party leader has declared he has no assets to speak of, blood and stones come to mind, neither of which can conjure up $60,000. And that’s ignoring any damages award, which may be considerably less and still might go unpaid.

However, presuming that he had an idea of how much this action would cost going in, it’s certainly possible that Van Stry considers this a personal mission to do his part to hinder piracy, not just for him, but on behalf of all the other authors that are currently supporting him. And, having come this far, the pressure is probably on to carry this through to the bitter end.

The closure of eBook.bike and/or legal destruction of Travis McCrea won’t do much to prevent the piracy of Van Stry’s or his fellow authors’ books on other platforms. And, from a strictly financial perspective, one has to sell an awful lot of books to recover $90,000.

So, to an outsider, this now looks like a battle of ideals, with McCrea’s ‘pirate’ mantra on one hand and Van Stry doggedly pushing back in the opposite direction. Unfortunately and in purely practical terms, it seems increasingly unlikely that either side will benefit financially from this litigation, unless one counts Van Stry’s legal team in that equation, of course.

Then again, perhaps money isn’t everything.