Half a decade ago, Popcorn Time was the first application to bridge the gap between torrenting and streaming.

The software amassed millions of users by offering an easy-to-use Netflix-style interface, providing access to the latest pirated movies and TV-shows.

In recent years many other pirate streaming alternatives have outgrown Popcorn Time in terms of popularity. However, the various forks of the app still have a significant user base.

One of the most popular ones is Popcorntime.sh. Like all other forks, it’s not linked to the original developers, who have long moved on. However, that doesn’t mean it’s spared from legal issues.

Several movie companies previously targeted the app by obtaining a subpoena which directed Cloudflare to reveal the identity of the operator. The same companies also targeted alleged Popcorn Time users in court.

A few hours ago another problem emerged. Without prior warning, the Popcorntime.sh domain name was suspended by its registrar. A quick Whois search shows the associated “clienthold” status. 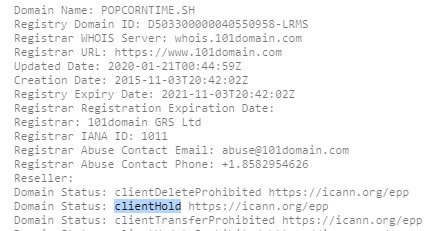 This clienthold status is set by the domain registrar, 101domain in this case, and informs the registry not to activate the DNS. As a result, the website had been rendered inaccessible to the public at large.

A spokesperson from Popcorntime.sh confirmed the problems and informs TorrentFreak that they were not warned in advance about the issue. Nor was it made clear by the registrar what the precise reason for this suspension is.

“They have sent zero notice before the suspension, neither did they explain why it’s suspended,” Popcorn Time’s spokesperson says.

The 101domain support team did inform Popcorn Time that a complaint had been received, the spokesperson says. However, who this complaint is from and what it’s about remains a guess.

This isn’t the first time that the registrar has taken action. Last November a similar problem occurred. However, according to Popcorn Time, this was the result of a payment issue. This time it appears to be an external complaint.

Given the nature of the Popcorn Time application and repeated complaints from rightsholders in the past about this type of software, it’s likely that a movie or TV outfit sent a complaint.

We reached out to 101domains with a request for further information but, at the time of writing, we have yet to hear back.

The Popcorn Time spokesperson says that they have switched to Popcorntime.app for the time being.
If they are unable to resolve the domain issue this change could become permanent.