The company filed a lawsuit against the people behind TVAddons, for example. More recently the company went after multiple pirate streaming sites and IPTV reseller Boom Media.

In addition to using well-established legal options, the company is also thinking ahead. That became clear this week when we spotted a new patent application from Dish, which envisions a blockchain-based anti-piracy system.

According to the company, piracy has become increasingly problematic. It’s not just limited to dedicated pirate sites but also plagues legitimate platforms such as YouTube and Facebook, it notes.

“For example, viewers can easily find links to live sporting events, hosted on someone’s Facebook account, find the newest episodes of their favorite series on YouTube or Dailymotion or even join groups like `mobile movies` on Telegram..,” the company adds.

Dish writes that “millennials” and the “next generation” are increasingly turning their backs on the traditional bundle service system, opting for less-costly alternatives instead. These cheaper alternatives include the consumption of unlicensed content on legitimate services.

While most large companies have their own anti-piracy solutions, these often have shortcomings, such as requiring rightsholders to actively search for pirated content. While a few large outfits use hash recognition to automatically detect content, those systems are often proprietary and not freely available.

The new patent application envisions a technology that is supposed to be superior. While it can’t really be used to stop pirate sites, it proposes a blockchain-based anti-piracy system that legitimate services can use to check whether the content is published with permission, or not.

“The inventors have conceived and reduced to practice a software and/or hardware facility that can be used by content owners to assert ownership of content so that copyright friendly websites and services can take action against copyright piracy effectively, efficiently and is scalable,” Dish writes. 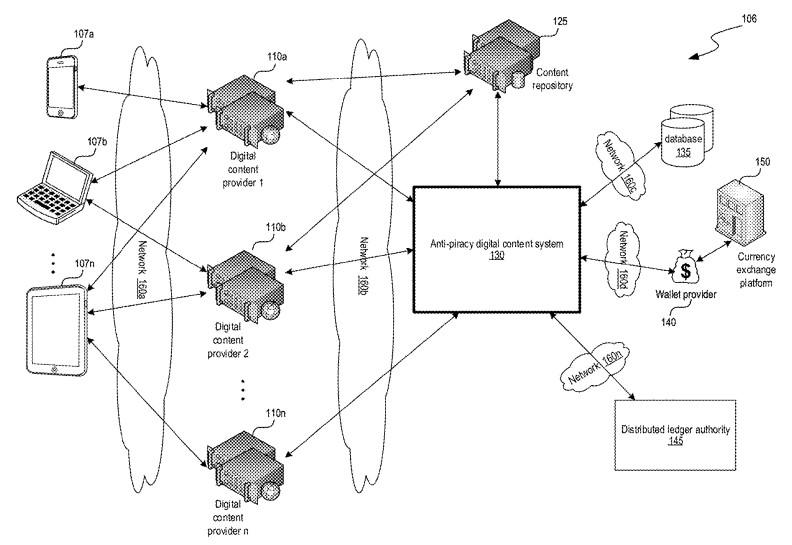 There are several practical implementations possible, but it’s clear that Dish is in favor of a widely available system that sites and services can use to determine whether content is authorized. The watermark or fingerprint-based system should interact with a blockchain to verify ownership details.

Without a practical implementation, it’s hard to determine whether this approach will succeed or not. However, blockchain-based copyright management itself is not a new idea, as others have proposed this as well. The same is true for watermarking and fingerprinting.

It’s interesting to see that Dish is actively pursuing an alternative anti-piracy approach. Time will tell if it comes to fruition, and if so, how effective it will be. One thing’s almost guaranteed though, there will be plenty of attempts by pirates to get around it.