To most users of mobile computing devices such as phones and tablets, they exist to be used however the consumer sees fit. However, the majority are restricted to prevent the adventurous from doing whatever they like with their own hardware.

To bypass these restrictions, users can utilize a so-called jailbreak tool. These unlock the digital handcuffs deployed on a device and grant additional freedoms that aren’t available as standard. As such, they are popular with modders who enjoy customizing their hardware with new features that otherwise wouldn’t exist.

Since it is viewed as one of the most restrictive manufacturers, Apple hardware and software face almost continual ‘attacks’ from people wanting to jailbreak its devices. There are many communities online dedicated to this scene, including Reddit’s 462,000-member /r/jailbreak forum.

“Reddit Legal have removed 5 posts (all release posts) for checkra1n and unc0ver. We don’t know what exactly was the copyright about. Admins never told us, we just saw their actions in our mod log,” a moderator explained.

Perhaps unsurprisingly, many linked the issues facing /r/jailbreak to an earlier drama on Twitter when an iOS hacker called S1guza published an Apple decryption key that led to his tweet being taken down following a DMCA notice. It took a few hours but the tweet was ultimately reinstated last evening. No specific reasons were given for taking it down, and none were provided for putting it back up.

The Twitter takedown was sent by Kilpatrick Townsend & Stockton LLP, a company that has acted on Apple’s behalf in the past. The notice itself, published on the Lumen Database thanks to Twitter, also provides no useful details as to why the tweet was targeted. 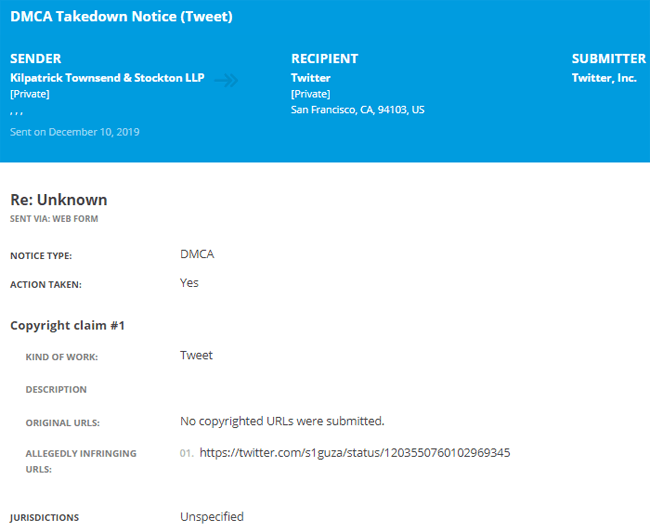 Since Apple was behind the takedown on Twitter and the most obvious culprit in respect of the DMCA takedowns on Reddit, many fingers were pointed towards the Cupertino-based company. However, despite the best efforts of the moderators on /r/jailbreak, Reddit’s admins would not provide the necessary information to identify who filed the DMCA notices or on what grounds.

With uncertainty apparently the order of the day, moderators of the discussion forum took the drastic decision to put their platform into lockdown.

“Locking down the subreddit to prevent new threads is one of the ‘standard’ responses moderators take to show the admins that the mod team isn’t playing, and that they are serious and ready to remedy the issue,” a post from the mods reads.

“Too many DMCA notices eventually end up with a warn and a ban (or just a ban) from the admins to whatever subreddit these notices are being sent to.”

While the DMCA notices in themselves are clearly the biggest issue here, unlike Twitter and Google, for example, Reddit does not routinely share DMCA notices it receives with an external database such as Lumen. If it did, the additional transparency would perhaps help to shine some light on the topic and prevent heavy self-imposed actions, such as the voluntary lockdown of the jailbreak sub.

Moderators report that Reddit’s admins were initially unresponsive to requests for information and that a database that tracks DMCA notices sent to Reddit didn’t provide any helpful details on the sender of the notices.

Last evening, however, one of the affected jailbreak developers ‘qwertyoruiopz’
announced on Twitter that things were some way to being resolved on Reddit and the sub had been taken out of ‘lockdown mode‘.

Soon after, a welcome response from Reddit’s admins was published, effectively signaling the all-clear. 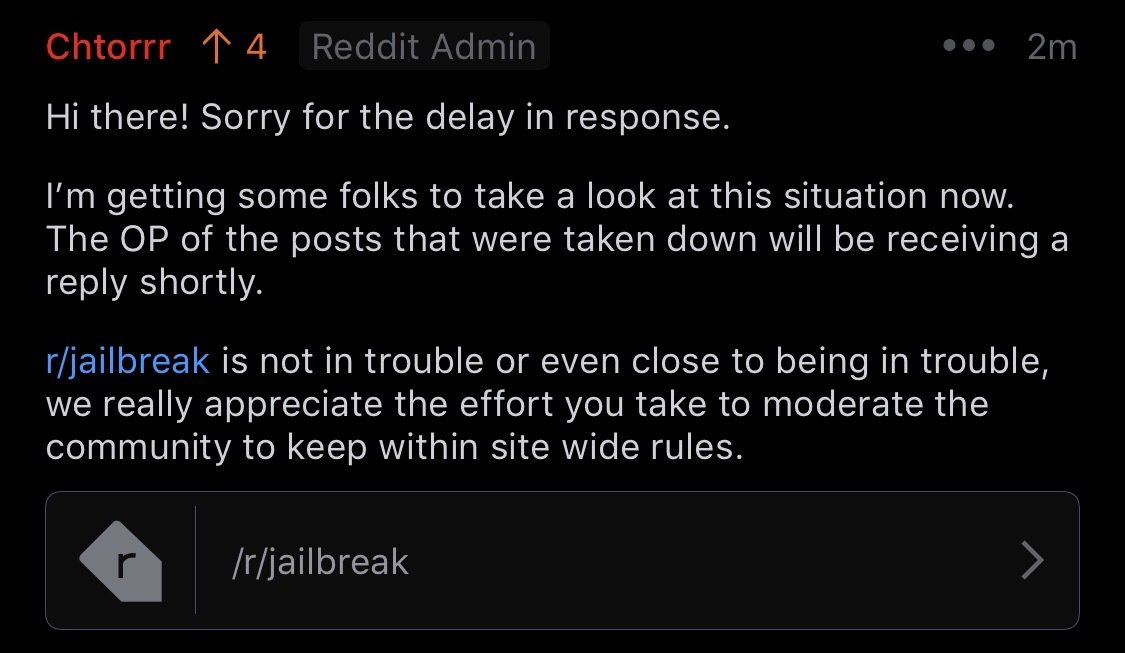 While the message was well-received, /r/jailbreak shouldn’t have been obliged to take such serious action to preserve its existence. The jailbreaking of iOS devices is considered legal in the US and the DMCA notices filed against Reddit clearly caught everyone by surprise.

It remains unknown whether they were indeed sent by Apple so the possibility remains that they were sent by some kind of imposter, trying to unsettle the community. Nevertheless, it is good news that all complaints have been lifted due to the claims being invalid, as per Reddit’s admins.

Without transparency from Reddit, however, the true nature of what happened is likely to remain a mystery. That being said, the moderators of /r/jailbreak deserve a big pat on the back for taking decisive action, quickly. Things could have really spiraled out of control but by showing good intent early on, things were brought back into line relatively quickly.

Now, let’s see those notices to determine who sent them, and why.