Alongside the mass uptake of digital readers such as Kindles, phones and tablets, plus a relatively small filesize, downloading of eBook and magazine content has gained in popularity over recent years.

There are plenty of sites catering to this popular niche but in common with platforms specializing in other areas, a handful of dedicated sites have found their way onto the preferred lists of many pirates.

One of those is eBookee, a download platform that doesn’t appear to carry content itself but indexes content hosted on other sites, notably file-hosting services. Indeed, a cursory review of eBookee’s traffic referral stats reveals that large volumes of users are directed to platforms such as Rapidgator and Nitroflare, for example.

During the past 24 hours, however, visitors to eBookee.org (the site’s main domain) were greeted not by links to eBooks or magazines (and less frequently videos and audio), but by a blank page. While temporary site downtime is nothing new in this space, it appears that eBookee has experienced a more significant problem relating to its main domain.

In common with The Pirate Bay’s main domain, eBookee’s .org domain is ultimately overseen by the Public Interest Registry with day-to-day business controlled by India-based Public Domain Registry. As the image below shows, the latter has suspended the domain. 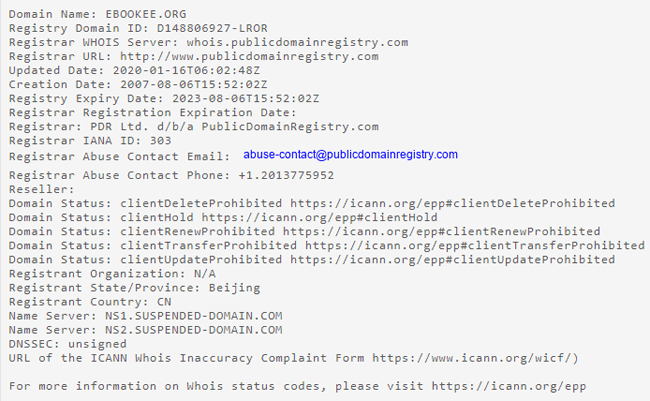 While it seems likely that a significant action caused the suspension, the specific issue (such as a complaint from a third-party, for example) hasn’t been revealed in public. PDR did not immediately respond to TF’s request for comment but it certainly wouldn’t be a surprise if the issue was copyright related.

Companies including Penguin Random House, Harper Collins, Cambridge University Press, Amazon, and National Geographic have all filed copyright infringement complaints against the platform with Google during the first few weeks of this year.

Overall, Google’s Transparency Report reveals that over the past several years, it has processed requests from rightsholders and anti-piracy groups to have 858,782 eBookee.org URLs deleted from its search results. Just 52% resulted in content being taken down, with the remainder either not in Google’s indexes or duplicate requests.

The eBookee.org domain was first registered way back in 2007 but it hasn’t been a trouble-free ride. In 2015, publishers obtained an injunction from the High Court in England to have the site’s domain blocked by local ISPs. That resulted in many proxy sites springing up to service the platform, none of which appear to be working today.

Finally, several social media pages claiming to be connected to or operated by eBookee.org are suggesting a new domain for the site. Checks carried out by TF suggest that the site is probably not connected with the official platform.

How To Install Ultimate Whitecream On KODI – UWC KODI addon