Streamlocator – https://www.streamlocator.com/
Review of the Sreamlocator Hub and service, the Best VPN Alternative for Roku, Apple TV, Smart TVs, and more! As a VPN alternative, Stream Locator will unblock streaming apps & services without any internet speed loss. You can connect any device (Roku, FireTV, Android TV, PC, macOS, smartphone, or tablet) to the Streamlocator hub and get access to otherwise geo-blocked streaming services.

The easiest way on How to watch US cable channels from abroad and the best VPN alternative for streaming platforms!

Apple released iOS 14 beta 5 and iPadOS 14 beta 5 for developers. As the public release date of iOS 14 is soon approaching, Apple is likely to focus more on fixing bugs and stability improvements rather than adding new features to the operating system. Below is a summary of all the new features and changes Apple made in the latest beta 5 for iPhone and iPad.

If you haven’t already, you can install the iOS 14 public beta on your iPhone and enjoy all the new features of the operating system right away. In addition to the changes mentioned below, you can also find Apple’s release notes for iOS 14 and iPadOS 14 beta 5 on this page.

There is a new taller Apple News widget for Today view that can display multiple news at once at the far-left screen. This widget increases the number of Apple News widgets to seven and it headlines for Top Stories, For You, and Best of Apple News. However, the higher ratio of this widget means that it cannot be used on the home screen.

There is now a wheel selector for the clock, which means users can scroll the time instead of having to type manually. There is however also the option to manually enter the time.

Users are also able to create a hidden album in iOS. With the latest beta, there is an option to show the hidden album under Utilities. The hidden album is always accessible even in the image selector. To enable it, go to Settings, scroll down to Photos, and look for Hidden Album.

Any app that has a widget and requests location data will now show a new option “While using the app or widgets” when requesting location access. This will provide the widget with your location data for up to 15 minutes.

Shortcuts app has now a new “What’s new?” splash screen upon first launch. This may be really useful for a lot of users.

Did we miss something? Let us know in the comment section down below.

Which is your favorite new feature or change of the latest iOS & iPadOS 14 beta 5? Do you think the new changes are towards the right direction or not?

For more info about KODI 19 on Apple TV 4K and on any Apple device: http://www.koditvbox.tv/?r=1
With the KTB App Store from Koditvbox.tv you can install easily and in the most stable way
KODI 19 Matrix, KODI 17.6 Leia and some other great applications on your Apple TV 4K without the need of jailbreaking your ATV. And you do not need to connect a computer to your Apple TV, everything is done remotely!

► Buy Licensed Keys 3% OFF on Games with Coupon DM3 & 10% on Software with Coupon DM10 from
✅https://dimitrology.com/recommends/scdkey/

The AppleTV-like build for KODI 17.6 Serenity by Schism TV has been updated to version 2.0 and comes with all the latest addons for a full media experience. In this update we reduced the size while actually adding content and some new addons. Also some internal bug fixing and re-arrangement.

The Serenity Build for KODI 17.6 v2.0 is now 269MB as a zipped file so it is smaller than ever. It only works on KODI 17 Krypton (better if the latest version 17.6) and brings everything from movies, tv shows, sports, live tv, kids and more. 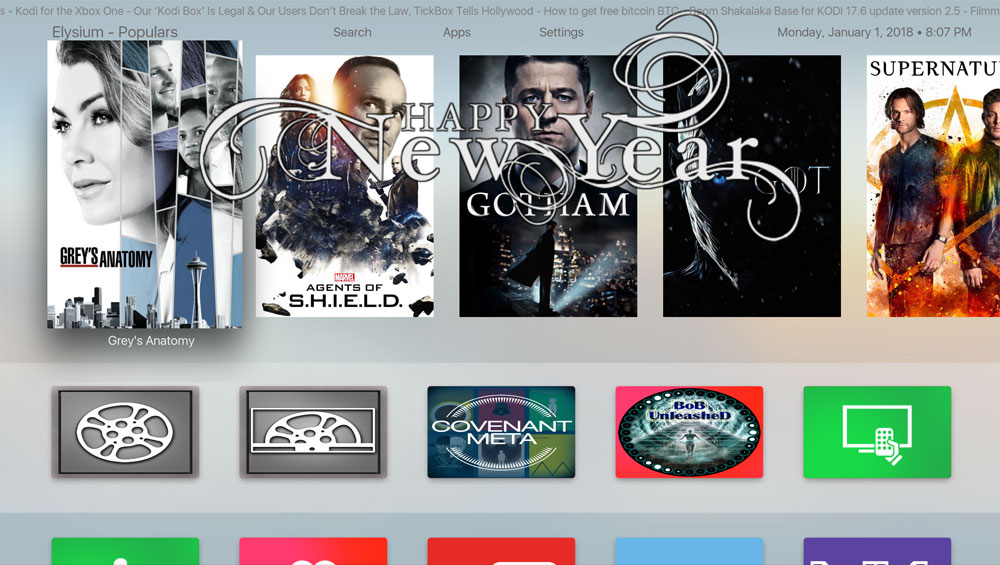 The “Happy New Year” message will only appear for today as 1st of January 2018. You do not have to do anything in order to make it go away. You can also change the theme color to Dark, as in the image below:

⇒ Please remember that we do not accept donations. The builds are 100% free. Happy streaming and happy new year! 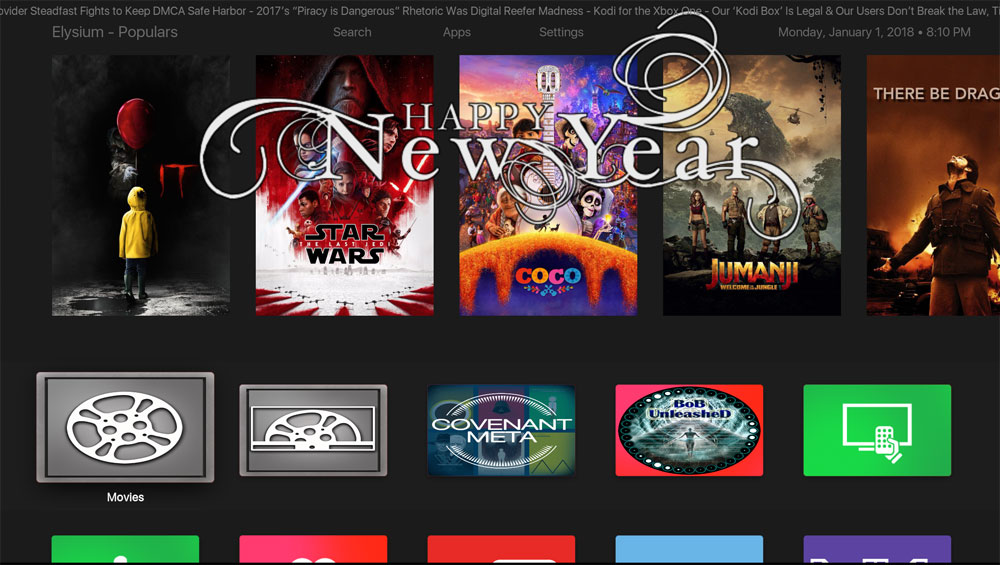 1. On a fresh installation of KODI (do always a Fresh Start before installing builds) go under SYSTEM and select FILE MANAGER from the submenu
2. Select ADD SOURCE
3. Click on NONE and enter https://dimitrology.com/repo and click on DONE
4. Select OK
5. Go to HOME
6. Select SYSTEM
7. Select ADDONS
8. Select INSTALL FROM ZIP
9. Click on repo from the list and select plugin.video.dimitv.zip
10. Wait for the notification that Dimitrology TV has been installed
11. Go to HOME
12. Select PROGRAMS
13. Open Dimitrology TV Wizard
14. Now select SETTINGS and enter the code which you can find at https://dimitrology.com/getcode
15. Select INSTALL
16. Select Serenity v2.0
17. Select FRESH INSTALL and wait for the installation to finish.
18. When asked to, select OK and then go to SETTINGS, INTERFACE and select the Serenity TV OSX skin. No force close is required.
19. If you do not see the thumbnails afterwards, this is perfectly normal as the wizard removes all the thumbnails. Simply exit from KODI, now open it once again and BOOM SHAKALAKA BABY!!!

The TVOSX / Apple TV-like Build by Schism TV, Serenity for KODI 17.6 has been updated and has some big changes. As always the looks are still the same but we had a lot of content changes. New addons, new repositories and also some departures since the 3rd party world of KODI addons has been shaken a lot in the last few days. 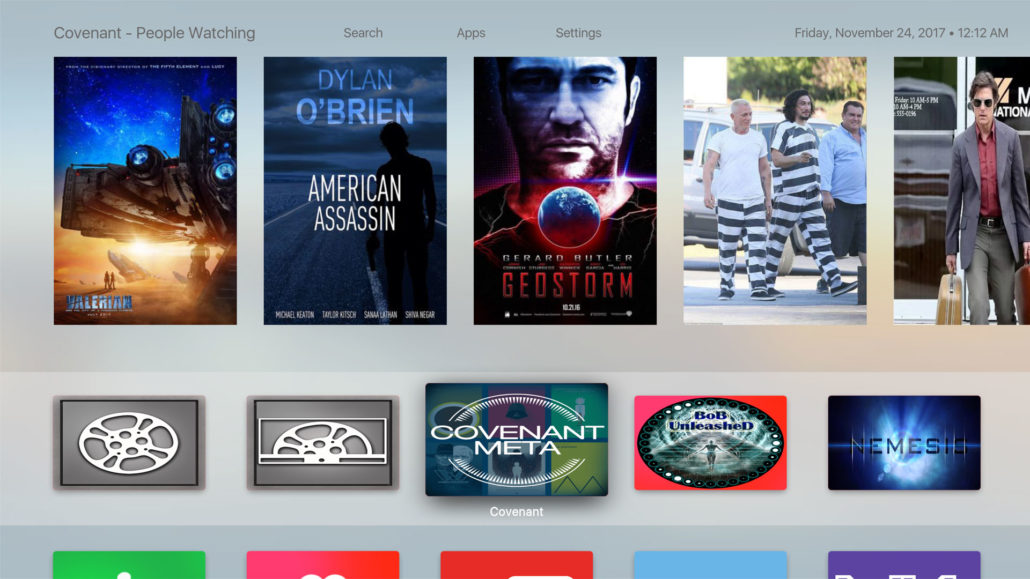 The main changes are:

The build’s size is less than previous by 10MB for a total of around 260MB as a zipped file. Enjoy and as always remember the build is FREE and we do not accept donations. Happy streaming and Boom Shakalaka! 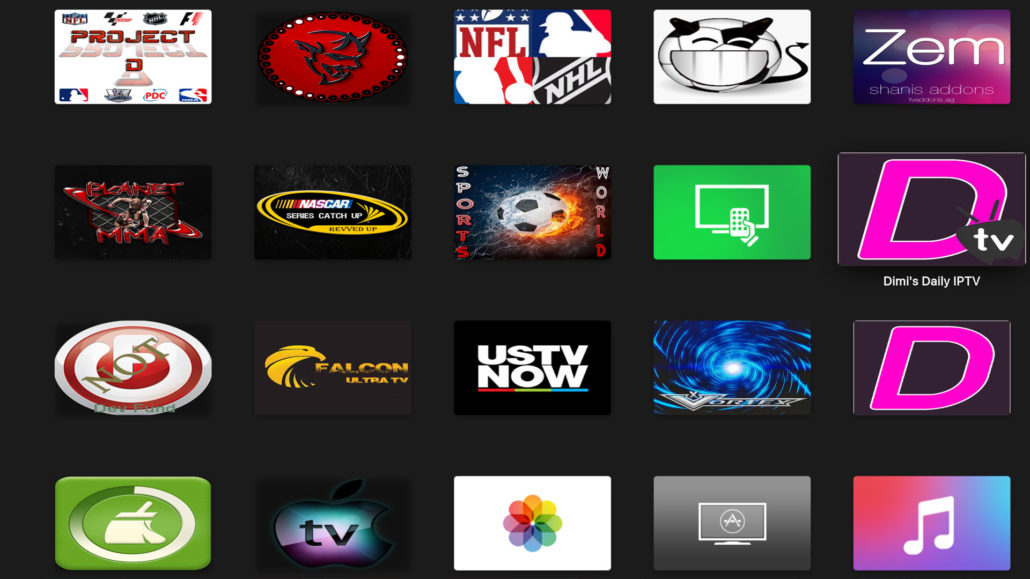 How to install the SCHISM TV SERENITY Build v1.9 on KODI 17.6 KRYPTON

1. On a fresh installation of KODI (do always a Fresh Start before installing builds) go under SYSTEM and select FILE MANAGER from the submenu
2. Select ADD SOURCE
3. Click on NONE and enter https://dimitrology.com/repo and click on DONE
4. Select OK
5. Go to HOME
6. Select SYSTEM
7. Select ADDONS
8. Select INSTALL FROM ZIP
9. Click on repo from the list and select plugin.video.dimitv.zip
10. Wait for the notification that Dimitrology TV has been installed
11. Go to HOME
12. Select PROGRAMS
13. Open Dimitrology TV Wizard
14. Now select SETTINGS and enter the code which you can find at https://dimitrology.com/getcode
15. Select INSTALL
16. Select Serenity ver: 1.9
17. Select FRESH INSTALL and wait for the installation to finish.
18. When asked to, select OK and then go to SETTINGS, INTERFACE and select the SERENITY skin. No force close is required.
19. If you do not see the thumbnails after setup, this is perfectly normal as the wizard removes all the thumbnails. Simply exit from KODI, now open it once again and BOOM SHAKALAKA BABY!!! 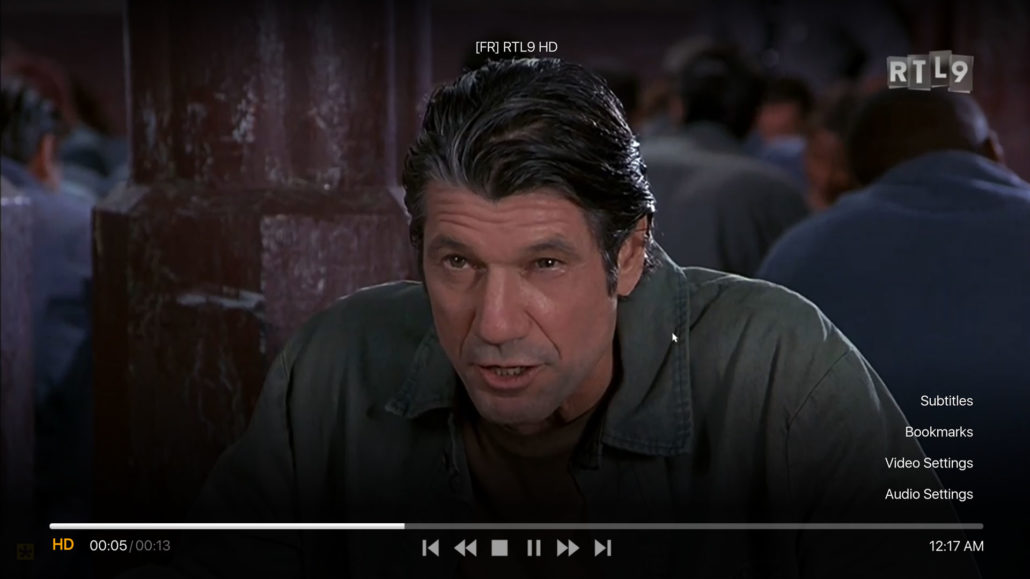 The Schism TV Serenity KODI Build has been updated to version 1.5! The Apple TV OSX build for KODI 17.x with the two skin themes (light and dark), now it is more complete than ever and offers fully working experience.

In this version, Exodus has been replaced with the new fork, the Covenant addon. Also SALTS (Stream All The Sources) is out but in it’s place we have the Duckpool addon from Mucky Duck, the previously iStream addon. END_OF_DOCUMENT_TOKEN_TO_BE_REPLACED

How to install the SCHISM-TV SERENITY BUILD on KODI 17, the Apple TV OSX KODI experience! In this last update, version 0.9 there are some changes, some ad-dons that didn’t work and some new additions like the Dimi’s Daily IPTV with premium live channel lists. The installation process is still the same, get the Schism-TV Builds code from https://dimitrology.com/getcode

One of the most beautiful and fully working builds on KODI 17, created by Schism and maintained now by Dimitrology, it’s on the Dimitrology TV Wizard. END_OF_DOCUMENT_TOKEN_TO_BE_REPLACED

Master Schism delivered one of his magic builds again! The Serenity Build for KODI 17 is a fact. The Apple TV OS adaptation on KODI Krypton is a fantastic build which has everything and with the fantastic integration of the Schism Addons like Zen for Movies and TV Shows, Karma for music and EZ Maintenance for auto-cleaning your device, takes the KODI experience into a whole new level!
You can get the Serenity KODI 17 Build by Schism from the SchismTV END_OF_DOCUMENT_TOKEN_TO_BE_REPLACED Looking for a beautiful, elegant and quality charging dock for your iPhone? Well look no more. Without spending much you can make yours this very beautiful and elegant dock for just $8.39 / €7.55 / £6.59 and free world-wide shpping! The HOCO CW1 comes in two different but also equally beautiful colors: Silver and Golden.

The dock can work as a normal dock if you want just a quality and tidy dock for your iPhone or also as a charging station. Just select the side you prefer and game on! The dock is compatible with the latest port for iPhone, the lighting port so it’s fully compatible with all the latest iPhones. END_OF_DOCUMENT_TOKEN_TO_BE_REPLACED